Flash burns of the eyes are usually associated with the welding process. However, if you have seen very many of the flashy-colored welding caps being worn today you might think the term originated with them. Why do welders in the first place wear welding caps?

Welders need to wear welding caps to protect their heads, necks and ears from the welding sparks that fly all around them. When you buy a good quality welding hat, you will not only protect yourself from the sparks but it will also provide excellent insulation from extreme cold.

What is the origin of the modern welding cap design? 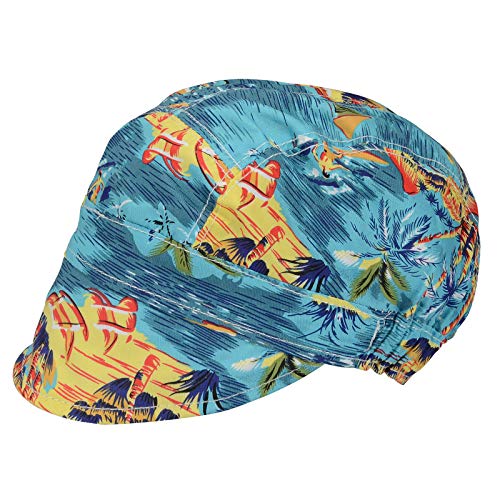 The history of the welders’ hat or cap, may be lost to time. There is a story floating around, wives tale or not, about a welder who years ago fell to his death while constructing a boiler. The crew took up a collection for his widow to help her out in her time of need.

She was grateful to the point that she wanted to repay the crew for their generosity. So, she decided she would make each one a hat. All she had for material were scraps of varying designs and colors. The men accepted them as they were and wore them.

In time, the crew realized that the design was actually beneficial. Especially, for keeping welding sparks and slag out of their ears. Soon, they were returning to the widow and paying her to make them more of these now called modern welding caps.

Regardless if true or not, the design of the welding hat has been around for decades. There are several mom-and-pop sewing shops across the country that custom-make their own variations of these caps. But, the basic design is still very much alive and well.

It may very well be that the welder’s cap is an offshoot from George Kromer’s railroad caps. Kromer’s caps were first designed around the turn of the 20th century. They do largely resemble welding caps. Kromer does still sell caps including welding caps. Check them out here on Amazon.

How to wear a welding cap?

When you wear welding cap like a typical hat or cap, it will ride snuggly just above the ears. This will leave the crown protruding high above the top of the head. The look takes a little getting used to but a well made, nice fitting welding hat can be quite comfortable to wear.

When welding in odd positions such as to one side, the hat can be pulled down over the top of the ears with the bill turned to cover the ear on the high side. If you have ever heard the sound of your own ear wax crackling from red-hot welding slag, you already know how beneficial this can be.

Overhead welding is challenging in more ways than one. Unless you want to learn some new dance steps, a welding cap with the bill to the back will keep hot sparks and slag from falling down the back of your shirt.

Also, when the welding cap is pulled all the way down, more head area is protected from hot sparks. If you have hair, it will be thankful.

What is purpose of floppy bill on welding caps?

A short bill that is softer and more malleable than your typical ball cap bill is easier to fit underneath a welding hood.

If the bill is too long or protrudes straight out like many wear them now, they will have a hard time fitting under a welding helmet. Having a shorter bill with a slight downward angle to it readily works to protect the ears and neck while easily staying tucked away.

Welding caps can be custom-made in several configurations. A longer, stiffer bill is an option as is a shorter crown. I suspect these are more for casual wear than actual work. They can also be lined for colder weather and comfort.

What are welding caps made of?

Normally the welding cap will be made of 100% cotton. Never wear anything nylon around hot work such as welding! As casual wear, they will be more comfortable in winter than summer since they do not breathe well.

Since welding caps are 100% cotton, they tend to shrink when washed. This means that if it fits perfectly when you buy it, it may not after a washing or two. Unless you make sure to wash your caps in cold water and use a low dryer setting. It’s even better to just let them air dry.

Growing up I knew an older gentleman who was a welder in a nearby gas plant. Everywhere he went he wore his welding cap. Several people remarked that they had never seen him without it.

A friend of mine once worked a summer as a welder’s helper for him and consequently became good friends. My friend went to see him at his house after the welder had missed work due to a lengthy illness.

My name is Liam. I got really into welding almost 15 years ago. Since then, I've been making various types of welds for both business and pleasure. With practice, I've learned what welding equipment works and what doesn't via firsthand experience. I want to inspire beginner welders about this amazing hobby and share my pro tips with all of you guys.